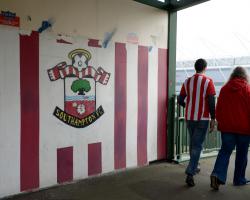 The club has said it will work with Hampshire Police as a major probe into historical child sex abuse in youth football continues up and down the country.

The news comes as West Midlands Police said it is currently "investigating four historical allegations of child sexual abuse in football" and Kent Police said it has also received reports of abuse within the county's football community.

A Southampton statement read: "Southampton Football Club would like to confirm that we have contacted Hampshire Police following information supplied to us in relation to historical child abuse within football.

"Hampshire Police and Southampton Football Club are committed to working together to investigate any historical allegations that may be brought to light in the Hampshire area.

"The club has informed Hampshire Police that we will offer our full support to any investigation they undertake, for as long as it takes, and with our full focus."

Two former Saints players were interviewed by BBC South on Thursday about sexual abuse they endured from an unnamed coach.

Meanwhile, a Kent Police spokesman said the force was reviewing the reports of abuse it had received, while the names of the football clubs linked to the claims and the number of allegations received have not been disclosed

The spokesman urged victims in Kent who have not yet come forward to call the NSPCC helpline on 0800 023 2642.

Meanwhile, 10 suspects have been identified as the scandal continues to grow, and Greater Manchester Police (GMP) said it was investigating reports from 35 people, with its inquiry growing on a "daily basis".

The National Association for People Abused in Childhood (Napac) said it has seen a tenfold increase in the number of adult survivors of child abuse registering for their support groups - from 10 registrations a week to 100 per week, in the past three weeks.

Napac chief executive Gabrielle Shaw said: 'We are getting a lot of calls from young men reporting abuse and some are extremely distraught during the call.

"But this is not just about football - huge numbers of people suffered abuse in childhood, within the family or institutions

Survivors often feel shame, pain and confusion about what was done to them."

The National Police Chiefs' Council said around 350 people across the country had reported abuse allegations.

A former Chelsea striker claimed he was paid ÃÂ£50,000 by the club not to go public with allegations that he was sexually abused by its former chief scout.

Gary Johnson, now 57, said the Premier League club asked him to sign a "gagging order" and has called for "total transparency".

It was reported earlier this week that Chelsea had made a payment to an individual in the last three years following allegations regarding former chief scout Eddie Heath.

Speaking to the Daily Mirror, which reported that Chelsea had now waived the confidentiality clause in Johnson's settlement, which was made last year, he said: "I think that they were paying me to keep a lid on this

Millions of fans around the world watch Chelsea

They are one of the biggest and richest clubs in the world.

I know they asked me to sign a gagging order and how many others are there out there?"

Chelsea said on Tuesday they had appointed an external law firm to carry out a formal investigation into a former employee, with the club refusing to comment on any of the details.

A club statement read: "Chelsea Football Club has retained an external law firm to carry out an investigation concerning an individual employed by the club in the 1970s, who is now deceased.

This will include providing the FA with any relevant information arising out of the club's investigation."

Mr Heath, who was the club's chief scout from 1968 to 1979, died before the allegations were made.

On Thursday it was revealed that a dedicated NSPCC helpline for football received 860 calls in its first week.