Southampton closing in on the appointment of Claude Puel 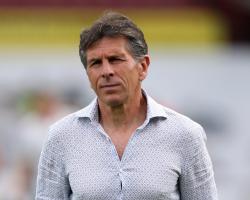 Saints have been busily weighing up potential successors to Ronald Koeman since the Dutchman's drawn-out, and somewhat surprising, move to Everton reached a conclusion two weeks ago.

Rudi Garcia was considered, only for Saints to decide the ex-Lille and Roma manager was not the right fit, while a move for former Manchester City boss Manuel Pellegrini was not pursued after initial talks.

Vitor Pereira and Eddie Howe have also been mentioned but Puel is now expected to take the reins at St Mary's.

Press Association Sport understands the deal is expected to be wrapped up by the end of the week.

The Frenchman has never worked outside of France, having spent his entire playing career at Monaco, where he was coached by Arsene Wenger, before making his first foray into management in the principality.

Puel won the Ligue 1 crown in 2000 and then went on to enjoy a six-year spell at Lille, before taking over at Lyon and leading them to the Champions League semi-finals.

The 54-year-old has spent the last four years on the French Riviera as coach of Nice, who last season finished fourth in Ligue 1.

Inspired by the resurgent Hatem Ben Arfa, Puel's side secured their equal-best finish since 1976 and direct qualification into the Europa League - one of 16 sides guaranteed a place in the group stage along with Southampton.

Puel will be taking over an upwardly-mobile club but one dealing with more big-name exits, with Victor Wanyama expected to be followed out of the door by Sadio Mane on Tuesday.

Wanyama joined Tottenham for a deal worth up to ÃÂ£11million and it is understood Liverpool could be paying up to ÃÂ£36million for Senegal attacker Mane.

Southampton moved to make their first signing of the summer before a new manager was in place, with Norwich winger Nathan Redmond arriving in a ÃÂ£10million deal over the weekend.