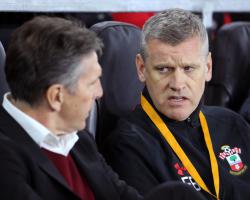 Black was among those named during The Daily Telegraph's investigation into alleged corruption into English football.

With the use of secretly-filmed footage, t he newspaper had alleged he offered advice to an undercover reporter, posing as a businesswoman, on how to bribe officials at other clubs for information on players

Black denied the allegations and after Southampton's internal investigation into the matter they are satisfied with his conduct and insists he retains their full support.

"Southampton Football Club can confirm that it has closed its internal investigation into allegations made by The Telegraph against first team assistant manager Eric Black," read a statement on the club's official website.

"Despite numerous requests to provide the club with any evidence relating to the allegation against Mr Black, none has been forthcoming.

"There is no evidence of any wrongdoing, and as such, the club now considers the matter closed.

Black was recruited in the summer to assist Claude Puel following the Frenchman's appointment as manager.