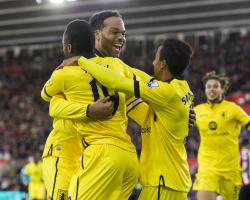 Joleon Lescott gave the visitors an undeserved lead and exceptional opportunity with a goal in the first half, but they remain bottom of the Barclays Premier League after substitute Oriol Romeu secured a 1-1 draw

After Wednesday's 6-1 Capital One Cup defeat at home to Liverpool, manager Ronald Koeman had spoken of his team's lack of balance between defence and attack and his belief it may be necessary to alter their approach.

The manager retained their familiar 4-3-3 shape, only recalling fit-again captain Jose Fonte for Steven Caulker in central defence, and the promising James Ward-Prowse for Jordy Clasie in midfield.

Koeman may have been worried about his team's poor run, but his concerns were minimal in comparison to Remi Garde.

In the three games since his appointment at Villa, the Frenchman has overseen two defeats and a draw and from the team which lost 3-2 at home to Watford came in Rudy Gestede, Leandro Bacuna, Jores Okore and Lescott.

Given he had yet to improve Villa's fragile confidence, the suspicion remained that an early Saints goal would result in a further loss of belief and another convincing defeat.

Southampton's approach immediately after kick-off suggested they shared that belief, and had they secured the opening goal their efforts deserved a comfortable victory would almost certainly have followed.

Instead, Dusan Tadic struck over the crossbar when Sadio Mane's second-minute burst of pace and cut-back had created space for him to shoot.

A minute later, Graziano Pelle connected too heavily with Tadic's cross, following Victor Wanyama's through-ball, to send the ball even further off target.

Villa's threat had been almost non-existent by the 19th minute, when Gestede cleared Fonte's close-range toe-poke from crossing the line after goalkeeper Brad Guzan poorly punched a corner into his path.

But when Mane headed over from close range almost immediately after, the home team lost urgency and belief.

The visitors only looked capable of scoring via a set piece or individual error, and in the 44th minute so it ultimately proved.

When Jordan Veretout's unremarkable corner evaded Southampton's defence, Lescott was left with the simplest of close-range tap-ins to finish into a near-open goal

Against Liverpool the manager's changes led to an increasingly one-sided defeat, but on this occasion they had the desire effect

Juanmi had already threatened with a low shot from the edge of the area that Guzan did well to save when, in the 73rd minute, Southampton won a corner

Ward-Prowse crossed directly into the penalty area and, from a similar position to Lescott, the stretching Romeu did well to reach the ball and poke it into the back of the net

Further chances came their way in the closing stages when, notably, another substitute, Shane Long, went close with a strike from distance, but a winning goal eluded them

It does little for their hopes of survival, but Villa should be grateful for the draw that means they now have six points from 15 games