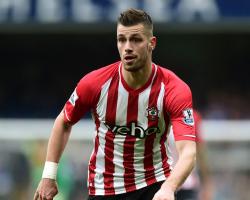 The 25-year-old has long been linked with a move away from St Mary's, where he has experienced many ups and downs since arriving from Strasbourg in 2008.

Schneiderlin had hoped to leave last summer, only for the Southampton hierarchy to block his path - a decision that worked well for both parties as the midfielder played a key role in helping Ronald Koeman's men finish seventh.

That would bring with it Europa League football next season should the FA Cup be won this weekend by Arsenal, a club the France international has been strongly linked to.

Schneiderlin would be open to a move to the Emirates Stadium, but ruled out joining the likes of Tottenham and Liverpool.

"Yes, I think my decision is made," he told French radio station RMC.

"I learned a lot last season

The goal is to stay in England

It is a championship that I like and where I have a lot of fun.

"If I leave Southampton, it is for a club that plays better than the Europa League.

"There are ongoing discussions, but nothing is done

But, of course, the Champions League is my goal.

"If I leave Southampton it will be for a club in the Champions League.

"I have a two-year contract

If a club pays the right amount for me, it will be time to leave.

"The amount? I have no idea, but I will not leave for a small price

Southampton is known to be a good seller club, the price should be high enough."

While Schneiderlin edges towards the exit, the fate of Artur Boruc and Jos Hooiveld has been sealed after both were released at the end of their contracts.

The pair, who ended last season on loan at Bournemouth and Millwall respectively, played a key part in Saints' rise to the Premier League and are amongst six professionals not having their contracts extended.

Cody Cropper, Omar Rowe, Jake Sinclair and Chris Johns have also been released, while Dan Demkiv, Mark Irvine, Niall Mason and Chris Regis have left the club at the end of their two-year scholarships.