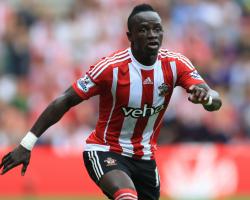 Referee Lee Mason gave the forward a straight red card during the first minute of second-half stoppage time when he caught Stoke's Erik Pieters in mid-air having mistimed a jump to challenge for the ball.

Saints manager Ronald Koeman indicated the club's intention to appeal following the match, given the feeling the decision appeared harsh, particularly as Mane kept his eyes on the ball.

The case was heard by an independent regulatory commission, which found in Southampton's favour, meaning now Mane will not face the mandatory three-match ban.

A statement from the FA read: " An Independent Regulatory Commission has today (Tuesday 15 March 2016) upheld a wrongful dismissal claim in relation to Southampton's Sadio Mane.

"The forward, who was dismissed for serious foul play during the game against Stoke City on Saturday (12 March 2016), will therefore not serve any suspension."

Mane's red card was Southampton's sixth of the season - the highest total for any Premier League team.