Saints stick to guns on Clattenburg 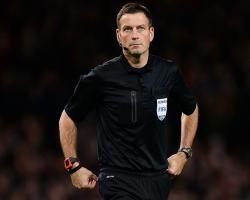 The club have failed with a complaint about the referee's alleged remarks to their England midfielder Adam Lallana, with the Football Association joining the referees' governing body PGMOL in taking no action.

Southampton, however, are understood to be sticking to their guns in insisting Clattenburg should not to be appointed to officiate in any of their games.

That would cut across the Premier League's rules - and it has reiterated last week's statement from the PGMOL that he "will be considered for selection for all and any matches going forward in the usual way".

Clattenburg was previously cleared of a complaint by Chelsea that he racially abused their player John Obi Mikel and has since taken charge of games involving the London club.

Saints had claimed in a letter to referees' governing body PGMOL that Clattenburg, during the defeat by Everton on December 29, had told Lallana: "You are very different now, since you've played for England - you never used to be like this."

Clattenburg has not disputed that and it is understood that referees' chief Mike Riley will expect him to take extra care in what he says to players, having developed a reputation for having a conversational style compared to most other match officials.

The FA has said the latest complaint against Clattenburg is also closed after clearing him of misconduct.

The FA has considered the complaint and will take no action.

An FA statement said: "The FA can confirm it received a complaint from Southampton concerning referee Mark Clattenburg and his alleged comments made to their player Adam Lallana.

"The FA has given its full consideration to this matter and it is our view that the comments, as disclosed in Southampton's letter of complaint, do not constitute misconduct under the FA's rules.

"Consequently, The FA will not be taking any further action in relation to this matter and now considers this case to be closed."

The club said they did not want him refereeing any of their matches until the issue was resolved and Press Association Sport understands that remains the case.

Southampton also want to see referees' conversations being recorded, and an independent panel judging complaints. The Premier League did consider recording all referees following the Mikel case but it was decided that the negatives outweighed the positives.

A Southampton spokesman said last week: "An official insulting any player, no matter his intentions, is clearly not acceptable behaviour. For this reason we do not accept the verdict of the PGMOL in relation to this case and do not consider the matter to be over.

"Under the circumstances we do not feel it appropriate for Mr Clattenburg to officiate in any of our matches until this matter is properly resolved."