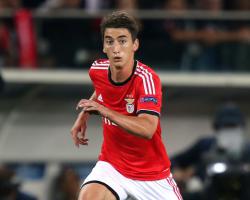 This month, like so many winter windows before it, has been quiet at St Mary's, with the loan addition of Eljero Elia the only arrival at the top-four contenders.

That is how Koeman had planned to keep it until injuries began to mount and midfielder Jack Cork rejected a new contract in favour of a move to Swansea.

Now, the Dutchman is looking to bring in a new player, with his key targets Benfica's Djuricic - a Serbia international who spent the first half of the season on loan to Mainz - and Vilhena at former club Feyenoord.

"On principle we are looking for a player that can play in different positions," Koeman said.

"That is the best - to bring in a player who can play in different positions.

"The case of Vilhena is that the management of the player called me and they were afraid about his situation at Feyenood.

First, the player is 20-years-old, he played a lot in Holland, he played 80-85 per cent of all the games in two seasons when I was the coach in Feyenoord.

That's not a risk.

"I don't know what level he will reach, but at least he is now I think at a higher level than most of the under-21 midfielders

That's always what you look for."

Koeman decided to make those moves after Cork rejected a new contract at Southampton in favour of a deal at Sunday's opponents Swansea.

"For a coach, he is always a player good to have in the squad because he can play in different positions in midfield," the Saints boss said.

"If you look back to the first part of the season, he was not starting.

"If I have all the players available, he is not one of the three players in the midfield.

"But he is an experienced player and he is a player who knows his situation and when he came into the team he was doing well.

"It is always important to have these kind of players for the coach, but, finally, the player has decided not to accept the contract and that means a different situation for the club, for the coach."

Koeman was surprised by the amount of time it took Cork to come to his decision, having first opened discussions two months ago, but understands the player's decision.

"We believe that we offered the player a very good contract and the player told me that it wasn't about the numbers in the contract," he added.

"It wasn't about the money, but about his feeling, about maybe not playing enough.

"Okay, I can't guarantee nobody they will play more

It is always competition that you have in your squad."

Cork has been a bedrock at Saints since 2011, with his exit the latest which leaves the team looking vastly different to when Jay Rodriguez and Sam Gallagher last featured.

Both have missed the entire campaign to date so far with injury, although the latter is at last closing in on a return.

"Sam Gallagher is starting training with the under-21s," Koeman said.

"I think that it is good for the player to start at a little lower level, having been a long-time out of training.

"With Jay, there is not any other positive news

He has continued working but I can't say now that he is two weeks or three weeks or one week closer to team training, no."