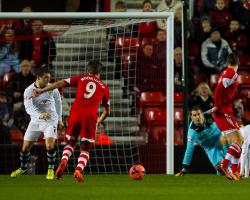 A 3-0 home defeat to Chelsea, an ugly spat with the Premier League over referee Clattenburg and a three-match ban for club-record signing Dani Osvaldo mean it has hardly been a happy new year to date for Saints fans.

However, the majority of those that braved the wet and windy conditions left St Mary's with a smile on their face after Mauricio Pochettino's side secured a thrilling victory against Sky Bet Championship promotion hopefuls Burnley.

Saints, winners in 1976 and finalists 11 years ago, recovered from an uneasy start to go ahead in style midway through the first half, with Nathaniel Clyne smashing home an exceptional volley from the edge of the box.

Rickie Lambert followed that up with a fine strike of his own six minutes later, only for two Southampton fans to put Burnley level at the start of the second half.

Sam Vokes and Danny Ings both spent time with the club as schoolboys and showed them just what they were missing, with a header from the former followed by the latter's low strike from an acute angle.

However, Burnley-born Rodriguez - given a warm reception by both sets of fans after replacing Lambert - put Saints back ahead, choosing not to celebrate in respect to the club he left in 2012.

There was no holding back when fellow substitute Lallana put the off-field issues behind him to net from distance - a strike that meant Kevin Long's late strike was merely a consolation.

Burnley proved a threat from the outset in the south coast drizzle, with Scott Arfield swinging a fine strike just wide after 43 seconds.

Vokes and Ings also had early chances as the Clarets continued to press, although it was Pochettino's men that were enjoying the lion's share of possession.

Gaston Ramirez was involved in much of the early play and sent in a fine cross, which looked set to be nodded home at the back post by James Ward-Prowse until Danny Lafferty's intervention.

The Clarets were showing just why their defensive record is the second best in the Championship, although they could do little to prevent the opening goal after 22 minutes.

Clyne was the unlikely source, collecting a pass before sending a rasping half-volley into the top right-hand corner from the edge of the box.

The right-back's second goal for Saints led home fans to bellow 'shoot' whenever - and wherever - he got the ball from that point onwards.

Lambert needs no such encouragement and six minutes after Clyne netted, the Saints talisman impressively struck into the top-right hand corner after picking up the ball 20 yards out.

The England international wasted a chance to make it 3-0 soon after - his last action before limping off after taking a knock.

There were few more popular figures inside St Mary's than Lambert's replacement Rodriguez, whose 35th-minute introduction was greeted by a loud ovation by all.

There was little more action before half-time, from which Burnley returned strongly.

Six minutes after the restart Kieran Trippier swung in a fine cross from the right and Southampton-born Vokes impressively directed his header past Kelvin Davis.

Ings tested Davis soon after as the Clarets continued to threaten, before Vokes saw a looping header land on the roof of the net.

Tom Heaton easily dealt with a Rodriguez strike soon after, before Burnley drew level as Ings showed impressive skill, control and confidence to cut inside and lash home from an acute angle.

It was quite the capitulation from Southampton and only a fine Davis save stopped Vokes making it 3-2 moments later.

Lallana, splashed across the back pages on Saturday due to the Clattenburg case, was brought on in a bid to change Saints' fortunes, with Rodriguez seeing a strike saved by Heaton when they returned to the attack.

The forward would not be kept off the scoresheet for long, though, slotting into the empty net as Ward-Prowse took a tumble in the box.

Play was swinging from end to end and Ings rattled the post as Burnley threatened an equaliser, although Lallana put the game out of sight with 17 minutes left as he drove forward to unleash a fine, low strike from distance.

Despite the goal, the visitors clearly still believed they could force a replay, with Ings threatening before Long bundled home their third of the afternoon.

Buoyed by 1,845 travelling fans, Burnley continued to press but there was to be a no grandstand finish as Saints secured a first win of 2014.