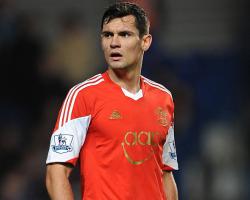 Both players were carried off on stretchers within minutes of one another as the Black Cats came from two goals down to take a point in their battle against Barclays Premier League relegation.

Ramirez's injury came when he was tackled by Sunderland defender Wes Brown while Lovren suffered a similar fate after a collision with Craig Gardner, with Southampton announcing through their official website that both players will be treated at the club's training base.

"Saints can confirm that Dejan Lovren and Gaston Ramirez both suffered ankle ligament injuries during Saturday's 2-2 draw with Sunderland at the Stadium of Light," the statement read.

"Lovren was treated by the club's medical staff at the stadium, while Ramirez was sent to a local hospital for precautionary scans.

"The pair both flew back to Southampton with the rest of the squad on Saturday evening, and have since been recuperating at Staplewood.

"The players' injuries are still being assessed by the medical team, so we are reluctant to place a timescale on when the duo will be able to return to action."

Both will miss Saturday's FA Cup fourth-round meeting with Yeovil at St Mary's but Saints' manager Mauricio Pochettino will be keen to have them back as soon as possible with his side having won just two of their last 11 league outings.