Saints back into top four with win 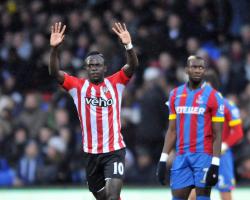 Many thought the bubble had burst on Saints' astonishing start to the campaign after an embarrassing Capital One Cup exit to third-tier Sheffield United made it five straight defeats in all competitions.

Saints brought that miserable run to an end against Everton last weekend and impressively racked up another big win on a wet day in south London, where Sadio Mane, Ryan Bertrand and Toby Alderweireld netted in a 3-1 victory, which saw Scott Dann score a late consolation.

The defeat means Palace have won just one of their last 12 top-flight matches - a poor run which not only saw them slip into the bottom three but resulted in a large number of supporters audibly turn on Warnock.

A chorus of "you don't know what you're doing" echoed around Selhurst Park when the Yorkshireman, back at the Palace helm for the second time, brought defender Martin Kelly on for Yannick Bolasie with his side already three goals behind.

Warnock's side did not concede after that and, in fact, managed a goal through Dann, but few could argue with a Saints win started by Mane rounding Julian Speroni.

The Senegal international turned provider as Bertrand classily finished early in the second half - a goal added to moments later as Alderweireld's header wrapped up an impressive Boxing Day result for Saints.

Traffic disrupted the visitors' preparation for this match, with their late arrival at Selhurst Park meaning the club's head of media had to hand in the team sheet.

The rushed pre-match preparation did not appear to have any ill effects on Koeman's side, though, given they rattled the woodwork inside three minutes.

After the ball fell loose, Alderweireld attempted an audacious hooked effort from 25 yards which was looping in until Speroni tipped it onto the bar.

Neither side was controlling the match, yet the visitors managed to make a 17th-minute breakthrough.

Mane collected a flicked header from Pelle and played a one-two with James Ward-Prowse, latching onto a fine return ball from the England Under-21s international to round Speroni and finish from an acute angle.

It was a feat the Senegal international looked set to immediately repeat, having again snuck past the Palace goalkeeper yet he was called offside from the long punt forwards.

That chance appeared to kick Palace into life as Mile Jedinak and Joe Ledley tried their luck from distance, before Fraizer Campbell hit the underside of the crossbar.

The striker was wrongly adjudged offside when collecting a looped header into the box, while Puncheon and Bolasie had attempts before half-time was called.

Palace certainly looked capable of drawing level, only for that hope to be extinguished as Saints struck twice within eight minutes of the restart.

Mane, impressing on his return to the starting line-up, turned his man in the corner and sent in a cross which Bertrand met with great panache, rifling home right-footed into the top corner.

Saints quickly notched up their third of the afternoon as Ward-Prowse made amends for two missed chances late in the first half.

The England Under-21s international swung in a corner and Alderweireld powered home a header after leaving former Portsmouth defender Joel Ward trailing in his wake.

Nathaniel Clyne attempted to pile the misery on his former club as he stung the palms of Speroni, while Florin Gardos, making his first Premier League start, impressively cleared before substitute Dwight Gayle could reduce the deficit.

Mane curled just wide as Saints came close to a fourth, leading to Palace fans' frustration to be exacerbated when Kelly replaced Bolasie.

It led large swathes of the home support to angrily turn on Warnock, although the exercise in damage-limitation worked.

Saints were unable to add any further gloss to the scoreline and Dann pulled a goal back late on, yet the final whistle was greeted by boos.