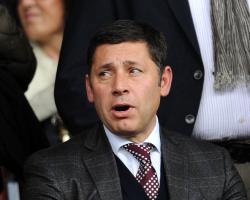 But Liebherr has once again moved to quash such suggestions, insisting the appointment of Rogers - who already worked for Saints as their chief financial officer - will benefit everyone at the club.

"I am delighted that Gareth has agreed to step into this role," she said.

"After the events of the past week, my priority has been to bring stability to the management of the club and I am pleased that we have been able to make this appointment from within.

"We had a very positive meeting with all the staff of the club on Monday and I am sure Gareth's appointment will be warmly received."

Rogers, who has been with Southampton since 2011, also declared his delight at taking up the role.

"I am very pleased to be able help the club by stepping up to the CEO's job on an interim basis," he said. "We have a fantastic staff and everyone is working together to make sure the club ends the season as strongly as possible."

With a replacement for Cortese in place and assurances from Pochettino that he does not intend to step down, Liebherr again insisted she does not want to sell any of Southampton's key talent.

"Having inherited Southampton Football Club following my father's untimely passing, I am delighted and proud of the exhilarating period of success that the team and the staff has enjoyed these past few years, buoyed by the unstinting support of the fans," she continued.

"I am absolutely committed to ensuring that the club continues this success. I have met our manager Mauricio Pochettino and have given him my complete support to build on the good work that has already been achieved.

"We have also said that we have no plans to sell any of the squad during the January transfer window. Yesterday I met the rest of the staff and gave them the same message of support."

Given the news that injured duo Gaston Ramirez and Dejan Lovren both suffered ankle ligament damage in the 2-2 draw with Sunderland, it may be that Pochettino will be requesting funds to add to his squad during January, rather than having the threat of losing players such as Adam Lallana and Luke Shaw to their rivals.