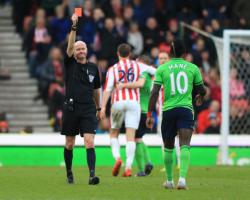 Referee Lee Mason gave the forward a straight red card during the first minute of second-half stoppage time when he caught Stoke's Erik Pieters in mid-air having mistimed a jump to challenge for the ball.

The decision appeared harsh, however, particularly given Mane kept his eyes on the ball, and manager Ronald Koeman indicated the club's intention to appeal after the game.

"Southampton FC can confirm we have lodged an appeal against the red card shown to Sadio Mane at Stoke on Saturday," the club tweeted on Monday.

Mane's red card was their sixth of the season, the highest total for any Premier League team.

Mane's appeal will be heard on Tuesday afternoon, a Football Association spokesman said.