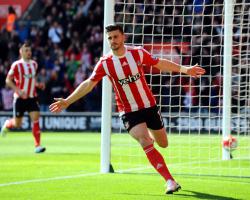 Under Armour, who already work with the likes of Tottenham, Andy Murray, Jordan Spieth and Anthony Joshua, will replace Adidas, who began a three-year partnership with the Saints in 2013.

Under Armour have pledged to bring innovation to the first-team shirts, including infra-red technology to combat cold weather, and to provide 5,000 pairs of footwear to the club's academy by 2023.

Southampton chairman Ralph Krueger said: "Under Armour shares similar values to us in that they achieve success through a combination of hard work and strategic thinking.

"At Southampton, our determination to succeed is accompanied by a commitment to develop athletes as people, and this partnership reflects this.

"Our challenge now is to retain our 'underdog' mentality whilst entering a sustained period of success."