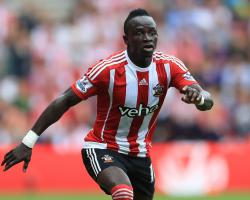 Mane was among Southampton's most committed players during Saturday's 2-1 FA Cup third-round defeat by Crystal Palace, a week after being criticised by his Dutch manager and dropped from the starting XI for missing a pre-match meeting.

Goals from Joel Ward and Wilfried Zaha, either side of Oriol Romeu's equaliser, secured Palace's win, but, following reports suggesting he wanted to leave the club for Manchester United or another interested party, Koeman was encouraged by what he saw from Mane.

"He was active, he was dangerous," the Southampton manager said

"Maybe in three or four situations, if he'd passed the ball maybe it would have been a chance, but he's a good player and that's not a problem.

"Maybe, with what happened last week, he was too focused to show his (individual) qualities, or to be important, but he played at a good level, he was dangerous, he had good movement.

"And it's difficult, because the organisation of Crystal Palace was good, and puts a lot of people behind (the ball), and it's not easy to score against them."

Mane's return struggled to mask the wider problems facing Koeman, whose team have suffered eight defeats in their past 10 games.

We started the game well, Oriol had two mistakes in possession and you see doubts in your team and that's difficult to explain.

Winning makes players full of belief and full of confidence.

"That's a mental question of the players

In a difficult time, they're maybe a little bit more afraid than they need to be as football players to give everything with the confidence you have to show, and that's difficult."

Their confidence appeared to be further undermined when, in the 68th minute, Zaha powerfully struck the rebound to Jason Puncheon's saved shot into the back of the net.

The forward passionately celebrated the goal, which came in the same season he has been criticised by Alan Pardew for diving and under-performing, despite the manager's belief he can earn an England recall.

And Pardew was particularly pleased with his contribution.

"He had some nice moments, (in the) second half, some great flair," Pardew said.

"The goal was very, very important, because I keep telling him to just wait that half a second on that final moment, that wasn't an easy finish that he had there, and he took it really, really well, so I was really pleased for him.

"That's the only part of his game that's missing, but he's in the box, he gets a knockdown - great."