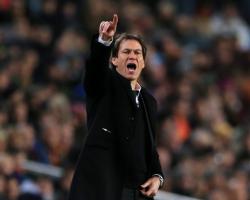 Ronald Koeman's drawn-out departure reached a conclusion on Tuesday when confirmation of his move to Everton was announced.

Southampton are understood to have received around ÃÂ£5million of compensation for the Dutchman, whose comments at Friday's unveiling did not go down well with the St Mary's hierarchy.

Koeman's suggestion that it was a case of sign a new deal or leave Southampton angered the Saints board, who are now assessing who best to succeed the former Holland international.

Ex-Lille and Roma manager Garcia emerged as favourite for the vacant St Mary's hotseat, but Press Association Sport understands such a move is now extremely unlikely.

The 52-year-old spoke to Saints but the club do not feel he would be the best fit at this stage.

Former Monaco and Lyon manager Claude Puel, ex-Ajax boss Frank de Boer and Fenerbahce coach Vitor Pereira have been mentioned as potential targets, with Southampton keen to get a manager in place before the players return for pre-season testing in a fortnight.