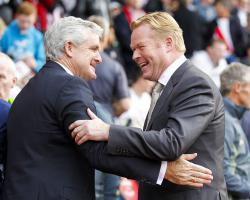 Hughes, who Koeman came up against many times during their playing days, was a technically gifted but physical striker who did not give defenders a moment's peace.

While the Welshman has adapted Stoke's style from their time under Tony Pulis, with talents like Bojan, Xherdan Shaqiri and Ibrahim Afellay pulling the strings, Koeman still sees the hallmarks of Hughes the robust player.

Koeman, whose Southampton side host City on Saturday, said: "Mark, as a player, was a tough one

He was always fighting, in an honest way, on the pitch.

"He was always trying to cause problems

He never made it easy to play, he was always pressing, with good movement.

They play with a high intensity, they give their opponent really hard work to beat them, and that's a reflection of the coach.

"Maybe they have a little bit more individual quality now

Bojan, Shaqiri and Afellay are not really strong, physical players, they are technical players

That changed a lot but the system is the same and we know we have to play at a good level to beat them."

Stoke have kept clean sheets in their last four away matches while Southampton have let in just 13 goals all season, so Koeman is not anticipating a high-scoring encounter at St Mary's.

"I don't expect a lot of goals

We are close together," added the Saints boss, whose side are bidding to extend their unbeaten run to nine matches in all competitions.

"It's always hard to beat Stoke

We had that experience last year

"I think the key to our run is good organisation.

"We had a difficult start, we had some new players, we lost some players, and you need always time to improve yourself

We have a tough programme in the coming weeks, but we are prepared for that."

Defender Virgil van Dijk should be fit for the clash despite suffering a knee injury on international duty with Holland.

Shane Long came through his substitute appearance for Ireland against Bosnia-Herzegovina unscathed following five weeks out with an ankle problem and should also be in the squad.

But fellow striker Jay Rodriguez is out with a foot injury which may require surgery.