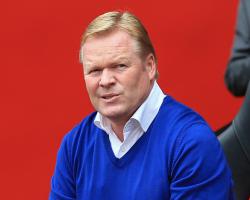 The midfielder was left out of the matchday squad as Saints picked up their first Premier League win of the season with a comfortable 3-0 victory over 10-man Norwich.

Koeman said before the game that Wanyama was not "mentally and physically good enough to play'' against the Canaries and, after seeing his side brush off Norwich courtesy of a Graziano Pelle strike and a brace from Dusan Tadic, he revealed the details of a conversation with the Kenyan last week.

"It is a difficult situation because Victor mentioned himself that he is not with his mind to the team," Koeman said.

"If Victor shows the commitment to the team and he comes back we would like to have him in the team, that is no problem

If he keeps playing like this he is playing with his own future and that is not good.

The situation with Victor is that he has lost some focus to the team, to the club and that is the reason I finally took the decision to keep him out of the squad."

Tottenham have been reported as being interested in the player.

"We had a meeting and it is true (that he has asked to leave), but it is the same question what it was for Sadio (Mane) and every player in this team - nobody is for sale," he said

"That is an easy answer and the player has to accept that, maybe it is good for Victor to talk to Morgan, because I think he is more happy now than he was last year even to do the move he wanted at that moment."

However, at that time Southampton dug in and told the France international he would not be allowed to go having already sold a host of first-team regulars

Instead, Schneiderlin left the club this summer for Manchester United.

"Victor is a very important player and is one of the key players," added Koeman

We need that commitment from the players.

"It is not about the move or the money, it is about the feel in the moment

The Schneiderlin situation was still in the pre-season, this is in the last week of the transfer window - that makes it different but not a difference in our statement."

In his absence, Southampton outclassed a Norwich side who were not at the races and were given a tougher task when Steven Whittaker was sent off in the first half after picking up two yellow cards

Manager Alex Neil had yet to taste defeat on the road since taking over at Norwich in January but admitted his team did not deserve anything from Sunday's encounter.

"I thought we looked too comfortable and didn't move the ball well enough and didn't work hard enough," he said.

"The type of team we are, the way we play, we have got to be up for the battle and I don't think we won our individual battles as well as we normally do.

If my team had played well today and given everything they had got the record wouldn't have bothered me as much."