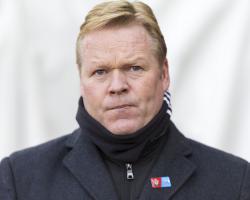 Koeman claimed the St Mary's outfit always expected a tricky season after another raft of high-profile departures in the summer.

Now the Saints are winless in six and gearing up to host high-flying Arsenal on Boxing Day, before travelling to West Ham less than 48 hours later.

Former Netherlands defender Koeman fully accepts only a reversal of fortunes will keep him in a job, but vowed to ease that pressure off his squad.

"It's difficult for the players because we have the experience from last year on how nice it can be," said Koeman, referencing Saints' seventh-place Premier League finish last season.

"We knew beforehand it could be a difficult season, but still it's not too late.

"We know we need a win

The best medicine is winning.

"You can keep positive, work hard, train well - but the final whistle is a different world if you win or lose."

Koeman met what he considers his worst run of form at Southampton by stating "every manager is under pressure".

The former Barcelona star branded Saints "naive" in the wake of last weekend's 2-0 loss to Tottenham, but the 52-year-old still believes his players can arrest their slump.

"We know we are in a difficult situation," said Koeman.

"We had a bad run last year, but not like this one.

"It means maybe a little bit of lack in confidence, in belief.

"But win the game and then it comes back.

"Every manager is under pressure.

"It's still quiet in Southampton but maybe in one month it can be different.

"We know if you are a long time in football what can happen and I'm not worried about that.

"I do my job, I do my best for the club and do what I have to do, and nothing else.

"Defensively we need to be stronger and more ruthless than we were against Tottenham.

"It was a difficulty we had last season too, to kill the game.

"Sometimes if we get a negative moment in a game, the team is changing a little bit, it's doubting about the qualities and not playing what they can.

"That's all about confidence.

"They have to realise we can play good football, but in the part in the game when we are really good and creating chances, you have to score."