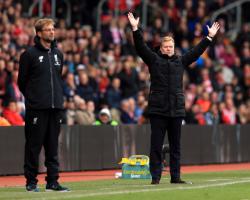 The Dutchman, who turns 53 on Monday, streaked down the pitch to join in the party as substitute Sadio Mane scored his second of the game to secure a 3-2 win which had looked virtually impossible at half-time.

Liverpool, having survived an early penalty shout as Dejan Lovren seemed to bundle over Shane Long, turned on the style and should have been further ahead than the two-goal lead given to them courtesy of good finishes from Philippe Coutinho and Daniel Sturridge.

Koeman reacted to a dismal first-half display by introducing both Mane and Victor Wanyama at the interval - with the former going on to miss a 49th-minute penalty.

But the Senegal international, whose last Barclays Premier League goal came in a 1-1 draw at Liverpool in October, dusted himself off and scored a brace either side of a Graziano Pelle strike to complete a remarkable turnaround.

Both sides had been level on points going into the game but it is Saints who now sit seventh as they look to achieve European qualification for the second straight season and Koeman believes he had every reason to show his emotion.

"It is the first time and I think the last time, I am still tired," Koeman said when asked about his uncharacteristic dash down the touchline.

"That happened because it was a must-win game for us today and when you are really down after half-time you need to do everything to go on and believe in yourself and score the first goal to get really feeling you can come back in the result.

I'm proud of the team

We had a great spirit after half time and it was hard to manage it after 45 minutes.

"Normally you get this chance, they will kill you more than they did

It is fantastic, 2-0 down and the importance of the game, the support of the fans

Tomorrow is my birthday and this is the best present I get.

"Normally the FA Cup winner will be out the top four or five in the league and that usually means the seventh position is not enough (for a Europa League spot).

"It is difficult to finish better than last year

We got six points Stoke and Liverpool which makes it possible

That's good because that means you are fighting for something until the end of the season."

Mane, who was only available after seeing his late red card in last week's win over Stoke rescinded, has not enjoyed as consistent a season as he did last year.

Some supporters have been upset by a perceived lack of effort and his start to the campaign was slow after being linked with a move to Manchester United.

But Koeman was delighted with the impact of the 23-year-old, especially having seen his penalty saved by Simon Mignolet.

"Sadio had a difficult time the last few weeks but I hope it gives the boy a real boost," he added.

But, with the Reds losing for the first time in Premier League history after leading 2-0 at half-time, Klopp was at a loss as to the contrast in displays either side of the interval.

"I saw lot of good things from my side," he said.

"In the second-half Southampton deserved it

You have to take your chances and in the first moment of the second half I saw it was not too good.

We could have played better

Despite the set-back, Klopp has refused to give up on taking Liverpool into the top four before the end of the season.

"There are nine games left, still 27 points to get," he added

"If we can get all of them there is a chance."