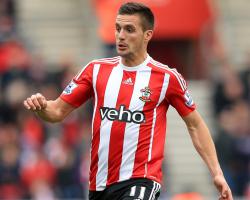 Tadic has already moved to deny rumours he was agitating for a summer move away from the south coast, and now Saints manager Koeman has followed suit.

Koeman has insisted though that Tadic would have sought him out directly with any problems over his future, rather than suffer in silence or make moves behind the scenes.

"For every player if he doesn't start regularly it's difficult," said Koeman of Tadic.

"You talk about what came out in the press, I spoke to Dusan and he was totally surprised.

"Even in the winter time when he wasn't playing all the time we spoke about his situation.

"There's no problem at the moment and for next season we will see what happens."

Koeman believes Saints can secure European qualification with less than 60 points, but admitted victory over Newcastle remains crucial to that ambition.

Midfielder Steven Davis has been ruled out with an ankle problem, while striker Shane Long is fit after knee trouble.

Tadic was one of Koeman's earliest signings at Saints in 2014, with the Serbia forward immediately impressing with his game-breaking passing.

This term the 27-year-old has struggled to hold down a regular starting berth, but Koeman insists that will not automatically lead to any frustration from one of his top assets.

Tadic has two years left to run on his current Saints deal, and his long-term future will no doubt become apparent in the summer.

"We have more players on the bench, more players who will not always start, and that's the competition you like to have," said Koeman.

"But there's no problem, because if there was any problem he is one of the players who speaks to me and we have very good communication.

"The answer is always on the pitch and not outside.

"We have more competition in front now, Jay (Rodriguez) is back, Charlie (Austin) is here and Shane Long has developed fantastically this season in the last few months.

"That's part of football and part of being a team.

"Look to every Premier League team, every team has a good bench because it's all about competition, and everybody has that."