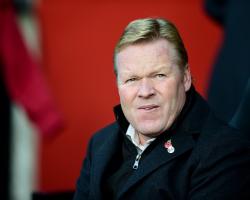 That is despite the fact Saints now sit above Liverpool and Chelsea in the Premier League and hold a six-point lead over the Blues having beaten the reigning champions at Stamford Bridge last month.

First-half goals from Steven Davis and Graziano Pelle were enough to see off south-coast rivals Bournemouth - even if they did have Victor Wanyama sent off late on at St Mary's.

There are now just four points between fourth-placed Manchester United and Koeman's side but the Dutchman does not see the path opening up to the top four despite the travails of a number of the usual top clubs.

"My experience is they are struggling at the moment but they will not struggle until the end of the season," he said.

It is difficult, it is too early to make conclusion about that.

It is a long way but we know we can play good football and we can be competitive with the big clubs in the Premier League."

Pelle scored his ninth goal with a trademark header to double Southampton's lead to top off another top performance.

Although Koeman was pleased with his striker's display he felt all of his attacking players went off the boil in a second half dominated by Bournemouth.

"He is very important," Koeman said of his forward.

"Like Graziano, like Sadio and also for Dusan - the difference was between the first and the second half why we lost more balls

They didn't have as much help but still they can learn from second haves like today.

"He is a very good striker, scoring goals, strong and in my opinion one of the best in the Premier League

They are clever boys but still they can do it better."

Bournemouth boss Howe agreed with Koeman's assessment of Southampton but thought his players had allowed their opponents to express themselves before coming back at them after the interval after a double change at half-time.

When asked about Koeman's comments on Saints' performance, the Cherries boss replied: "We contributed to that.

"They were very good and I'm not taking anything away from their performance but physically we were not where we needed to be.

"It is a difficult one for us to work out, the first-half performance to the second half

The personnel changed helped, first half we weren't ourselves in or out of possession.

"You have to give Southampton credit but the pleasing thing is the players put in the performance in the second-half and the only thing missing was the goals.''