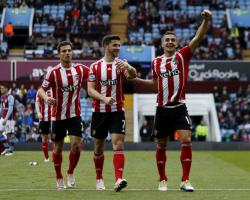 The Saints cruised to a 4-2 Premier League win at relegated Villa to keep the pressure on Liverpool, who blew a 2-0 lead to draw 2-2 with Newcastle.

They are eighth in the Premier League table, a point behind Liverpool and two adrift of West Ham, and Koeman wants to keep the pressure on their rivals

He said: "What you like, at the end of the season, is to play for something, that is always better than when the season is over

We are winning again and putting the pressure on them

That's what we like to do and we have to do it next week.

That's good because we are close but we need more wins, we know.

Everyone can be very happy how it works."

Long now has six goals in his last seven games against Villa but missed several chances to add to his tally, including hitting the bar early on.

And Koeman revealed the Republic of Ireland international said sorry afterwards for not scoring more.

He said: "He apologised after the game because he wasn't scoring more goals that one

It's part of the job to miss chances

He was positive because he is working hard and creating a lot of problems."

Ashley Westwood's double was little consolation for Villa, who were constantly jeered by their own fans after gifting the Saints their first two goals.

Defeat was Villa's 10th straight league loss and they are a game away from equalling a club record run when they lost 11 matches in 1962-63.

Black said: "It's difficult circumstances, they are trying to voice their opinions

We have to keep working hard with them and they have to remain professional.

"I'm standing there so I'll take it (the abuse)

I understand the fans' frustrations and they have ideas on what team they want to see but I can't be led down that road.

"They've have had the worst season in recent history, they have seen poor results and performances

They have every right to voice their anger."