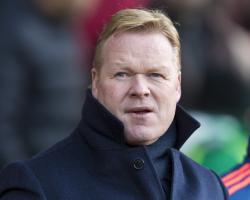 Much has been spoken about Klopp's favoured 'gegenpressing' system, with which he inspired such success at Borussia Dortmund and has worked well during his short time at Anfield.

However, Koeman is convinced Southampton have the measure of the system ahead of Wednesday's Capital One Cup quarter-final clash against the new-look Reds

"We know Liverpool likes to press and if you beat the press then you have a lot of options and possibilities," the Southampton manager said

"The individual qualities of these players in big teams will punish you for that.

"It wasn't really City but all our fault in the first 20 minutes because it was very poor.

"(Liverpool) have the fast transition when they get the ball.

"When you lose the ball, they play a different system to most teams with one striker and then two strikers behind the striker

It's hard to have a good defensive organisation.

I prepare my team always about what we can do and how we beat the press and then we have good opportunities to create chances.

"(We need to) be aware (about) what we did very poorly last weekend.

"In that quality we have to improve and we have to play our level, and if not they are very dangerous."

Several Premier League teams no longer take that competition or the Capital One Cup seriously, but Koeman is determined to achieve success in such competition be cause he believes Saints' opportunities are limited elsewhere

"It's very important because we have, as a Southampton team, two opportunities to win a title," said Koeman, who will replace injured captain Jose Fonte with Steven Caulker on Wednesday.

We don't win the Premier League and it's very important (to do well in this match).

"First, about the competition we like to reach the semi-final, and, second, after the two defeats the best way to get back full of confidence is winning."