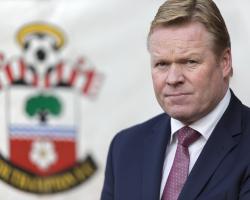 Saturday's 2-0 Premier League defeat at home to Tottenham, following goals from Harry Kane and Dele Alli, left them without a victory in six and, as the manager had already conceded on Thursday, at risk of joining the battle against relegation to the Championship.

Southampton had impressed in the opening 30 minutes by nullifying their visitors' collective threat and creating goalscoring opportunities of their own but soon after the last of those was wasted, poor defending allowed Kane and Alli to effectively seal victory by half-time.

Koeman is rarely one to criticise his team, but asked if he had been encouraged by their start to Saturday's game, he angrily responded: "It's too easy to agree with that because also we made some unbelievable mistakes

If you watch the first goal what happened, it's like amateurs.

"We need to change our mentality

We need (to) work different now

After many defeats in the season we have to react.

"We need more killing mentality, because it's unacceptable how they scored the first goal.

"We need to change our mentality, we are too nice on the pitch, and I don't ask for stupid falls, I don't ask for yellow, red cards, because that is out of frustration, but the mentality as a player, that 'I win my battle against my opponent'

Tottenham shows what you need to do to win the game.

If we don't change that mentality then we will continue struggling in the Premier League, because the teams are too strong.

"We know we can play nice football, but it's all about scoring, killing the game

We get four or five chances, but we are too nice.

"Maybe the players don't realise enough the situation of the club

"I'd have to go too much into inside information (to explain), but I see things happened what I see happened during the week (in training), and we are not good enough

We need to be a strong team and we are not clinical enough, we are missing a killing mentality.

"Watch the first goal: that kills everybody.

"Opponents at the moment are not afraid of Southampton."

Tottenham's victory, combined with Manchester United's 2-1 defeat by Norwich, took Spurs into the Premier League's top four for the first time this season and further strengthened their pursuit of qualification for the Champions League.

"It's very important to stay there," said manager Mauricio Pochettino, who also confirmed his decision to substitute goalscorers Kane and Alli was purely precautionary and not because of any injury concerns.

"But it's not important for us today the table

The table for me is how we finish (at the end of the season).

"For that, we need to keep working hard, be focused

We are younger and don't need any distractions

We need now to believe more.

"The reaction (from losing to Newcastle) was fantastic

To win this game was fantastic for us

We felt very disappointed about the result

I want to congratulate the players on what was a fantastic game."