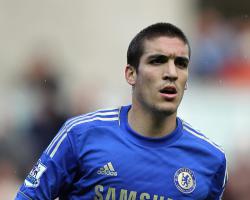 The 23-year-old joined the Blues in August 2011 but made only 22 Barclays Premier League appearances during his time at Stamford Bridge.

He spent season-long loan spells with Valencia and then Stuttgart before opting to join the Saints for an undisclosed fee on Wednesday night.

Executive director of football Les Reed told saintsfc.co.uk: "We are extremely happy to be able to bring Oriol to the club on a permanent basis

"Once again, we are demonstrating our commitment to compete seriously on all fronts this season by continuing to build a squad with depth and quality."

The former Barcelona player was, along with Saints left-back Ryan Bertrand, part of the Chelsea squad which won the Champions League in 2012.

Reed added: "Oriol is a player we have had on the radar for some time - he was a prominent figure in the Chelsea team of 2011-12, when he made 24 appearances as a 20-year-old.

"Like Ryan Bertrand, we believe we have recruited another Chelsea player with an excellent pedigree but also with lots of potential to develop.

"He is another player who matches the Southampton profile - he is young and hungry, has been developed at a top academy and has already played at the highest level with plenty more to come.

"He will complement the qualities we already have among our squad and provide another level of competition for selection."

Romeu is yet to represent Spain at a senior level but has featured in the Under-23 team, playing at the 2012 Olympic Games.

Romeu said: "It's very good to be a part of this club

"After spending two years on loan, I needed something permanent and a club with a future - and I think I chose the right one.

"Southampton are doing the right things in the last few years and, once they came to me and asked me to come here, from the first day I was hoping to come.

"Now I just want to keep going and to keep developing as a player, and I'm looking forward to start playing as soon as possible."