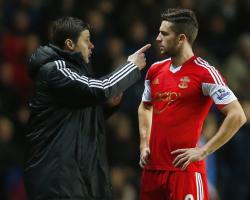 Pochettino left St Mary's to take the vacant post at Tottenham, where he was handed a five-year-contract at the end of May.

The Argentine guided Southampton to a club-record eighth-placed finish in the Barclays Premier League last season and Rodriguez was full of praise for his former boss.

"Mauricio is a great manager and a great guy and was well-respected by the lads," Rodriguez told Press Association Sport.

"He worked us really hard and we got the good results and finished eighth which we were happy with.

"Football moves on though so it's one of those things."

Southampton face a battle to hang on to their key players this summer with the likes of Adam Lallana, Luke Shaw and Calum Chambers all being linked with moves away.

"You don't want to see players going and the team being taken apart," said Rodriguez

" You can sometimes never stop it, it is one of those things so I'm trying not to think about it and hopefully we will have everyone at pre-season."

Rodriguez, who scored 17 goals in all competitions last season, was in contention for a place in England's World Cup squad before he suffered an anterior cruciate ligament injury against Manchester City in April.

The 24-year-old says his disappointment was eased by support shown to him by the fans.

"It was massive, a really big help to see the support I got," Rodriguez added.

"How the Man City fans reacted on the day was great for me and obviously everyone at Southampton has been brilliant.

"It was hard at the start and that helped me through it."