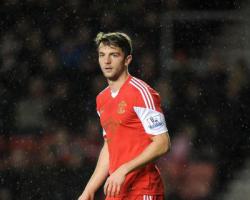 An awkward fall at Manchester City in April saw the 25-year-old rupture an anterior cruciate ligament, the injury ruling him out of the reckoning for England's World Cup squad.

Rodriguez has yet to make his return more than eight months later and, having gone under the knife again last month to clear out his knee, a comeback does not appear imminent.

Before the routine operation Saints had hoped to have last season's top scorer back for the hectic festive period; now it looks like a return will not come until February.

"He had to make a step back in his recovery," Koeman said.

"That was a pity because I remember when we spoke about the squad in the pre-season I said Jay will be like a fantastic signing for December or January and he isn't.

"All these kind of unlucky moments are part of the difficult time that we have.

"After a big injury, you don't have to rush

He needs time and we give him the time to come back, but it's a pity because he's a great player.

He's now making steps forwards and he needs more time and that's the most important.

"To fix a date makes pressure on the player and the medical staff."

While keen not to say when Rodriguez would make his comeback, Koeman did admit a return before February was unlikely.

"I think now, in this situation, he will not be available before the end of January," he said

Rodriguez is one of a host of players unavailable for the visit of Everton this weekend, with Jack Cork, Dusan Tadic, Sam Gallagher and Jake Hesketh also sidelined by injury.

Morgan Schneiderlin, Victor Wanyama and Florin Gardos are suspended for the St Mary's encounter, while Graziano Pelle and Steven Davis are doubts.

The string of absentees means Koeman will be relying on Southampton's much-vaunted youth system to help end a five-match losing streak.

Koeman said Harrison Reed would "probably" start his first Premier League match on Saturday, while Lloyd Isgrove is pushing to join him.

Jason McCarthy, Dominic Gape, Jake Flannigan, Sam McQueen and Ryan Seager are others vying for a place in the squad to face Everton as Saints look to end their worst losing run of the 21st century.

"We don't have other solutions," Koeman said

"It is not that I don't like it, because it is one of the philosophies of the club, to give them that chance.

"But of course for them it is more comfortable if the team is doing well and you take one out and put one into a team doing well.

"Now in too many positions we have changes

We don't at the moment have that same confidence that we had in the beginning and that makes it more difficult for young players, but we don't have more players.

Then I will see what we have available, but for sure in the 18 players we need five or six under-21s."