Pochettino to carry on with plans 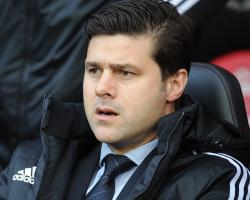 The Argentinian has signalled his intention to review his position at the end of the season following Cortese's exit and the appointment of club owner Katharina Liebherr as non-executive chairman.

Asked how the boardroom changes might affect the club's long-term vision following Saturday's 2-2 Barclays Premier League draw at Sunderland, Pochettino said: "It's clear that that's a question that should be directed to the chairwoman, and it's also clear that we are just going to continue on the path we have been on.

"It's clear that we need to analyse many things with the chairwoman. We will see what happens in the transfer window, we also need to analyse what has happened with these two players who are injured (Jose Fonte and Gaston Ramirez).

"But overall, I can't answer so many questions in such a short period of time. I also have the same questions."

If a form of peace has broken out at St Mary's Stadium, Pochettino left Wearside counting the cost of an eventful 90 minutes at the Stadium of Light during which his side started at a sprint, but left the pitch having squandered a 2-0 lead and with Jose Fonte and Gaston Ramirez on their way to hospital.

The visitors looked to have taken a decisive lead when Jay Rodriguez put them in front after four minutes and Dejan Lovren volleyed home a 31st-minute corner.

Sunderland dragged themselves back into the match within seconds through Fabio Borini's effort, but they were second-best for an hour.

However, the Saints failed to capitalise on the wealth of opportunities they created and they were made to pay with 19 minutes remaining when Adam Johnson smashed a stinging shot through keeper Artur Boruc's hands to snatch a point.

Pochettino added: "I am quite disappointed with a point. I think we actually deserved to win the game, but in the end we leave with one point and two injuries."

Fonte, who was hurt in a challenge by substitute Craig Gardner, and Ramirez, who was caught by Wes Brown, were carried from the pitch within seconds of each other and the initial signs were not good.

Sunderland boss Gus Poyet was relieved to have emerged with a point after a dreadful start to the game, and is hoping his players will head into Wednesday night's decisive Capital One Cup semi-final clash with Manchester United free of pressure as a result.

He said: "It's a very good point. I am very realistic, it looked bad, really bad. It looked really dark.

"It looked like nothing was right for us, so at that time if you had said to me, 'You are going to get a point from the game' I would have taken it, for sure.

"In the end, we got a point - let's be happy and let's make sure we go on Wednesday with a different feeling to enjoy Old Trafford and try to do something special, but without the pressure of the points in the Barclays Premier League."

Meanwhile, Poyet admitted he was unaware of director of football Roberto De Fanti's impending departure on Friday, and is preparing himself for discussions over the club's transfer window plan.

Asked for his reaction, he said: "Surprise. It was a club decision. I was working with him until the afternoon.

"My phone is going to be ringing a little bit more, but it's my job. We have got the targets, we have got things that are going well.

"But you need to adapt in football. Things change, so we will see."