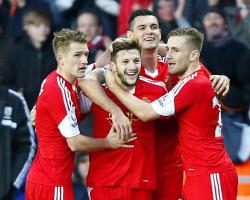 Adam Lallana's second-half strike proved the difference in what was for the most part a dull and frustrating encounter at St Mary's.

The 1-0 victory was only Saints' second in 10 league attempts as they collected a first home clean sheet since October, having conceded 11 goals in those five previous matches.

That represented quite a drop off by what had been the sternest backline in the Barclays Premier League and former Argentina defender Pochettino was pleased to see them looking strong again.

"I think the evolution as of late has been good," he said. "I think the team has progressed a lot.

"I think the team as of late has been playing better, but it has been lacking defensive solidity.

"The most important thing about this team is that regardless of that fact it has been facing some struggles, it has kept on believing in the work that we do and how we play.

"That winning mentality has kept throughout the tough period."

The return of goalkeeper Artur Boruc after six weeks out with a fractured hand played a major part in the clean sheet, with his fine save preventing Shane Long grabbing a late equaliser.

It was a stop that put a smile on Pochettino's face, but will have no doubt frustrated new Albion boss Mel.

The man who led Real Betis to seventh in last season's Primera Division was named Steve Clarke's successor on Thursday and watched from the stands at St Mary's.

Mel has yet to meet the Baggies players and Pochettino hopes his former mentor is a success at the Hawthorns.

"I know him so well that he was actually my teacher, my professor, when I was getting my pro licence at the Spanish FA about six or seven years ago," he said.

As Mel watched from the stands, assistant head coach Keith Downing took charge of the team for the last time before handing over the reins.

The caretaker manager confirmed Mel did not give any pre-match instructions and is now looking forward to working under the Spaniard.

"I saw Pepe yesterday which was nice," Downing said.

"It was a good conversation, he is a warm man and wants to put some good ideas across, so I look forward to working with him next week."

"We are all disappointed about what we did with the ball. We were frustrated today and credit to the opposition, they don't give you time and quickly press you as soon as they lose it.

"When the goal went in we changed shape and threw a little more caution to the wind and it opened up and we got more into the game as it progressed.

"I think he will work on us in terms of possession and creativity, but I thought there was commitment in terms of the team defensively."