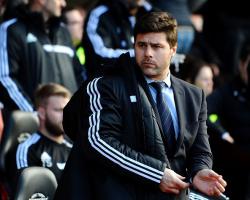 The former Espanyol boss has refused to commit his long-term future to Saints in the wake of executive chairman Cortese's resignation on Wednesday night.

Pochettino has vowed to remain at St Mary's until the end of the season after owner Katharina Liebherr installed herself as interim non-executive chairman.

Ex-Argentina defender Pochettino hailed Cortese's influence after his Southampton departure, raising the prospect of the duo reprising their double-act elsewhere in England's top flight in due course.

"I don't know what's going to happen in the future," said Pochettino.

"He's a great negotiator, so what else can you add? He's already the full package."

Cortese quit on Wednesday after his fractious relationship with Liebherr reached the point of no return.

The 45-year-old is understood to have been at loggerheads with Southampton's owner over the long-term vision for the club.

Markus Liebherr steered Southampton out of administration when he bought the club in 2009, but the construction machinery magnate's death a year later led to his daughter taking the reins.

Her lack of football knowledge was central to Cortese's resignation, but Pochettino said his departed boss advised him not to quit the club as well.

"It would make no sense for me to leave this club in the middle of the season, no one would understand it," said Pochettino.

"I'm pretty sure Nicola would not understand that decision from me.

"I will finish the season and then we will see what happens.

"It is clear that at the end of the season we will assess the situation at the club, and then we will decide whether it will be apt for me to stay here for another season.

"When people change, things change, it's inevitable that will happen, but I am still committed to this club for now."

Pochettino said Liebherr has given her backing to his current coaching set-up.

Until a chief executive is recruited, though, Premier League rivals will view Southampton's top talents as fair transfer game.

Manchester City, Manchester United and Chelsea are all circling coveted teenage full-back Luke Shaw, while West Ham are believed to be closing in on England striker Rickie Lambert.

Expecting the new chairman and owner to update him on the club's new structure shortly, Pochettino said: "I would imagine that those kinds of people have people around them who do know about football, like myself.

"It's not up to me when the chairman speaks to me, it's up to her to speak to me as she pleases.

"On a personal basis I would not be in agreement to sell any player we do not want to sell."