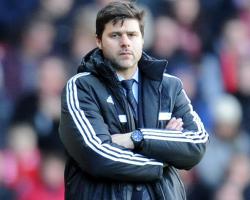 Having spent much of the first half of the season making positive headlines, Saints have spent the last week under the spotlight for the wrong reasons.

The club failed with a complaint about Clattenburg's alleged remarks to England midfielder Adam Lallana during the defeat by Everton on December 29, with the Football Association joining the referees' governing body PGMOL in taking no action.

It is a situation that has led to much debate and ridicule - but Pochettino hopes that can be forgotten, with his focus on Saints' clash with West Brom this weekend.

"For me the matter was over a long time ago," he said.

"I already said what I needed to say about it after the game against Everton. Now we need to look to the future and help referees as much as we can.

"I take full responsibility for what I said about that game but I think now it is time not to dwell on it, we get over it and we have to focus on the future.

"If we ever do come across Mark Clattenburg again, we will try to make things as easy as possible because we know it's a tough job."

The powers that be at Southampton are understood to be sticking to their guns about the Clattenburg affair, insisting it would be difficult for him to officiate in any of their games.

That, though, does not appear to be a view Pochettino shares.

"It would not be a problem if we had Mark Clattenburg again refereeing us," he said.

"We would try to help as much as we can. We know refereeing is a very tough job that demands a lot and we try to have a very good relationship with him, a very impartial game and a very fair game which is what we all want from this game."

The complaint stems around Southampton's claim that Clattenburg told Lallana: "You are very different now, since you've played for England - you never used to be like this."

Despite the club rather than player making the complaint, the comments have seen the attacking midfielder come under criticism, not that Pochettino has seen a negative impact on the England international, who scored in Saturday 4-3 FA Cup defeat of Burnley.

"The whole matter with Clattenburg has been forgotten and it hasn't affected him at all," he said.

"Adam is a very strong player mentally so he has completely forgotten.

"I think sportsmen in general quickly forget about things such as these and referees as well are also sportsmen and they forget about it as well so it's in the past, it's history.

"Our main focus right now is to learn from it. We are fully aware to be a referee is very tough, it's a very demanding job. But we also have the right to complain whenever we feel we have been hard done by in certain situations.

"It's up to us to try to help referees as much as we can so the situation doesn't happen again."