Perez focuses on the action 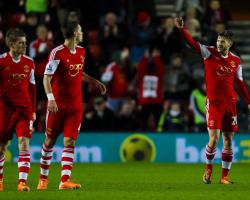 Saints have endured a tough start to 2014, with a 3-0 home defeat by Chelsea and a three-match ban for club-record signing Dani Osvaldo compounded by the ongoing disagreement over an allegation that Mark Clattenburg verbally abused Lallana in the 2-1 defeat at Everton December 29.

Southampton's refusal to accept the Professional Game Match Officials' decision to rule out action against Clattenburg has led to talk of a possible appeal to the Football Association and resulted in Lallana featuring prominently on the back pages of newspapers on Saturday.

It was a subject assistant Perez, speaking instead of manager Mauricio Pochettino, refused to talk about after the 4-3 third-round win over the Clarets.

The Spaniard said he did not have "the authority to talk about it" and that it was a "situation for the club", although he was more forthcoming on Lallana's impact after his goal from distance proved the difference at St Mary's.

Perez said: "I think everyone can see Adam Lallana this season and every single minute he is on the pitch he tries to do his best and is always doing great, great things.

"It's no surprise for me when Adam Lallana on the pitch is doing things and goals like he did.

"I think it (the Clattenburg situation) hasn't affected him. We are professionals.

"When you are in this business you have to be aware of everything and you have to stay away from the pressure of some things around football and just focus on being fit and being mentally ready to play.

"He played like the other players of the squad with the best mentality at the end of a tough period where it's difficult to keep a strong mentality because fatigue is not only physical but also mental - and it was important for us to be in the next round."

It had looked like it would be an easy afternoon for Southampton, who went in at half-time 2-0 ahead thanks to fine strikes from Nathaniel Clyne and Rickie Lambert.

However, Southampton fans Sam Vokes and Danny Ings drew the Sky Bet Championship promotion hopefuls level, only for Burnley-born Jay Rodriguez to put Saints back ahead.

Lallana's long-range strike meant a late Kevin Long effort was merely a consolation, as Saints secured safe passage to the fourth round.

"It was a strange game but you know in the cup game everything is possible because the teams are playing without pressure," Perez added.

"Sometimes one of the sides is clinical and the other not so much and I think that was the case.

"The most important thing is stay in the next round, especially when you play a cup game at the end of a tough period like Christmas was for us - and I'm just happy for that."

Progress was a relief for Southampton after a match that left Burnley manager Sean Dyche proud.

"If there is such a thing as losing a game the right way, then that is it," he said.

"Three of their scorers are England players and the other is Â£2.5million worth, so that shows a measure of the two clubs.

"But performance-wise we were excellent. We played with no fear, very good football and were very attack-minded.

"I think their players came off thinking 'wow, we could have easily got turned over'.

"They brought on two England internationals. That shows the strength in depth they have. I was going to bring on my assistant."