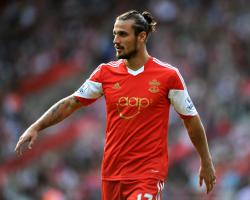 The 27-year-old Italy international in the summer swapped Roma for St Mary's in a deal that could be worth up to ?14.6million.

The signing was quite the coup by Southampton but one that has yet to bear fruit, with Osvaldo managing just three goals in 13 appearances.

The forward is currently serving a three-match ban for violent conduct and there have been reports that he may well have played his last game for the club.

Inter Milan and Fiorentina are apparently interested in taking him back to Serie A, but Pochettino will not let the Argentina-born striker leave.

"In Italy, in Spain, in Russia and Argentina with Boca Juniors, too," Pochettino said in English of the constant speculation, before adding through his Spanish interpreter: "He is very happy here, he has been training very well.

"He is very expectant to be fulfilling his contract here. He is also expecting the birth of his son and is expecting his son to grow up in England.

"I am very sorry about all these rumours happening right now, but they are just not true."

Asked if expectation brought by the lofty price tag has had a negative impact on Osvaldo, Pochettino added: "I don't think he was an expensive player, I would say.

"If you look at the prices in the market, I don't think he was an expensive player.

"If you look at the price to his quality, he is a cheap player. I don't mean cheap in a negative way, I mean he is value for money.

"The hardest thing has been his adaptation to the league, that has been the most troubling thing and something he has been working on."