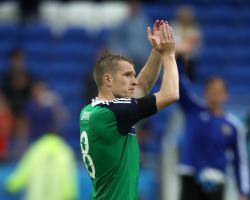 The 31-year-old, who is currently captaining Northern Ireland at Euro 2016, has been with the Saints since 2012 and made 155 appearances for them to date, scoring 11 goals.

Southampton executive director of football Les Reed said in a statement: "I am delighted that Steven, another influential leader in the dressing room and on the pitch, has committed his future to Southampton football club

"Having coached Steven myself both at club and international level, I know only too well how important he is to whichever team he is playing for

"I am sure players and fans will be delighted with this news, as he joins (defender) Virgil (van Dijk), Prowsey (midfielder James Ward-Prowse) and (goalkeeper) Fraser (Forster) in extending his commitment to the club."