Monk pleased with spot on tactics 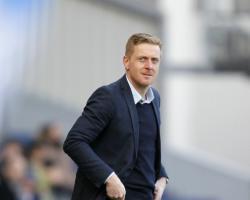 Arriving on the south coast without a top-flight victory since Boxing Day, few expected their rotten recent form to improve in Sunday's late kick-off.

However, Swansea managed to frustrate the hosts, with a resolute defence and dollop of luck allowing them to eke out a 1-0 win, courtesy of Jonjo Shelvey's fine, late strike.

"I am happy with the three points after what has been a difficult month for us for various reasons," Monk said

"We have lost players, had injuries, players away on international duty and suspensions.

"It has been difficult for us but I talked in the week about getting back to basics.

"We came here with a game plan and I thought we executed that game plan very well.

"And what a goal - a fantastic strike from Jonjo which deserved to win any game.

"I thought we were good for the three points, especially in the second half.

"We came to frustrate them a little bit and in the second half we knew that if we used the ball a little better we'd get our chances and so it proved."

This was certainly not the free-flowing Swansea onlookers have become accustomed to, with the players instead displaying a dogged, battling side.

"I knew coming here against a very good side - they're in the Champions League spots, don't forget that - who have had a fantastic season," Monk said of his former club.

"The game plan was to concede a little bit of possession, to frustrate them to grow into the game, get into the hour mark.

"Obviously then I knew they would push, the crowd would become frustrated and we would look to go and push for that first goal.

"I think tactically we got it spot on today

That's what you have to do.

"I know better than anyone else at Swansea City, the amount of football we have played over the years, that you can't always do it [the same style].

"There are certain circumstances, certain periods of time, when you have to adapt and be able to change

I think we showed that today was fantastic."

Monk heaped praise on match-winner Shelvey and captain Ashley Williams in the post-match press conference, while he downplayed a touchline spat with Ryan Bertrand.

The Saints left-back clashed with the Swansea bench after a lunge on Modou Barrow, which saw him sent off by referee Michael Oliver in the dying minutes.

"I thought it was a bad tackle, but I was more appealing because knew it was a free-kick," Monk said.

"Whether it was a red card, I'm not sure

I appealed for the free-kick as I think he felt he'd won the ball.

"I just said 'how do you think you can win that ball from the side or behind?' There's no problems whatsoever."

Monk says Barrow received a blow to the back of the knee but is fine after a challenge Southampton counterpart Ronald Koeman did not think was worthy of a sending off.

"In my opinion, it is not a red card," the Dutchman said

"These fouls in my opinion is yellow

Bertrand will now miss the next three matches through suspension, increasing the number of absentees Saints are having to deal with right now

Such issues, along with the departure of Jack Cork to Swansea, means Koeman will be active on transfer deadline day, with his key targets Benfica's Filip Djuricic and Tonny Vilhena at former club Feyenoord.

"We have one day more," he said

I expect something, yes."