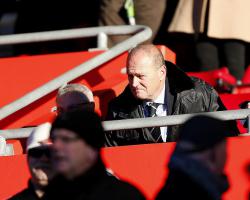 After 26 days of dilly-dallying, the man who led Real Betis to seventh in the Primera Division last season was on Thursday belatedly named Steve Clarke's successor.

That quick turnaround meant the Spaniard watched from the stands at Southampton on Saturday, when Adam Lallana's strike resulted in a 1-0 loss that ended a four-match unbeaten league streak under caretaker Keith Downing.

Mel will have been impressed by the organisation, if not the creative flair, Albion displayed at St Mary's, but will be aware of the importance of beating Everton in his first match.

The Baggies lie just three points off the relegation zone and frontman Vydra has highlighted the importance of hitting the ground running at The Hawthorns.

"We lost so we don't have any points," he said. "We need to win the next game against Everton.

"I have not spoken to the new manager as he comes on Tuesday for the first training.

"He was at Real Betis and the last year I think he got them into the Europa League, so he is a good manager.

"He is Spanish and plays with a European style, so I am looking forward to playing under him.

"We don't have a lot of time to prepare and we need to win the next game. It is most important."

Vydra came on as a late substitute against Southampton - his ninth league appearance from the bench this term.

The 21-year-old Czech international has made just one Premier League start since joining on loan from Udinese, who last season sent him to second-tier Watford.

Vydra's fine performances for the Hornets saw him named Championship Player of the Year and, while not getting as many chances to shine this term, he insists he remains happy at West Brom.

"I feel good," he said. "Two months ago I got injured and now I am fit so I want to help this team go up the table.

"Last year I played all the time, but this year is difficult because it is the Premier League rather than the Championship. I need to wait and take the chances."

One man whose patience is paying off is Southampton midfielder Jack Cork, having re-established himself in the starting line-up after a spell dropped to the bench.

The 24-year-old was pleased to help Saints on Saturday secure just their second victory in 10 league outings and what was first home clean sheet since October.

Mauricio Pochettino's side conceded 11 goals in that five-match period, marking quite a drop off by what had been the sternest backline in the Barclays Premier League.

"We've had a tough month against some big teams and it's great to get out of that bad run and start moving forward again," Cork said.

"We looked a to a few clips from our play at start of the season to see what we could do differently from the bad patch we had at Christmas time.

"We just tried to go back to how we were at the start of season, we tried to get the pressing back, to have the energy and the aggression and I think we did that, so big congratulations to the lads for getting back into it."