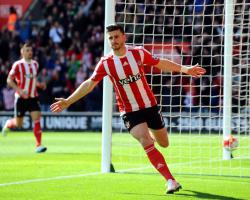 The forward scored one and set up two in their 4-2 win at Aston Villa on Saturday as Ronald Koeman's side kept their slim chances of qualifying for the Europa League intact.

The Saints are eighth in the Barclays Premier League with three games left, five points behind fifth-placed Manchester United who have a game-in-hand, and Long refuses to give up.

"No games are easy in this league," he said

"We have (Manchester) City, Tottenham then (Crystal) Palace so we're going to go for it in these three games and hopefully the results go our way and the end to the season is in our own hands."

Long opened the scoring at Villa Park before laying on two goals for Dusan Tadic as the Saints claimed an easy victory.

Sadio Mane bagged a fourth in injury time after Ashley Westwood's brace made the visitors sweat but Long says they always felt comfortable against their already-relegated hosts.

"When they got that goal just before half-time it put us under pressure again and we had a lot of chances but we didn't finish them off," he told the club's official site.

"When there's a goal in it, it's always dangerous but we had the quality to go on and score a few more.

"It was a good performance. We could have scored a lot more and me personally I had a few chances which hit the post and the crossbar which is a shame, but we're happy with the performance."