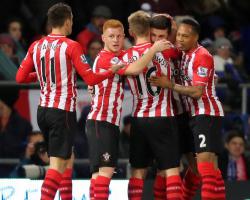 Saints have been one of the stories of the season, with a summer exodus and talk of a meltdown replaced by chatter about Champions League qualification.

Sunday's 1-0 win at Manchester United proved to the doubters that Ronald Koeman's side are genuine top-four contenders, while another victory by the same scoreline at Portman Road ensured they would maintain a two-pronged attack.

Saints set up an FA Cup fourth-round tie at home to Crystal Palace by emerging victorious from their third-round replay against Championship promotion hopefuls Ipswich.

Long's impressive first-half strike was the difference in what may have been an "ugly game", but one which keeps alive the Premier League surprise package's hopes of a trip to Wembley.

"It's only the early stages in the FA Cup now, but I think we've got a good enough squad to push for that," he said.

"I suppose the first thing is the league, but it would be nice to get some silverware as well.

"The gaffer gave a few lads on the fringe of the first team a chance and I felt they came in and did brilliantly.

"Young Matty Targett on the left and Harry (Reed) in midfield were exceptional, and I think it was a chance for them to show the gaffer if he needs them they're ready to step up.

Hopefully they can kick on from here.

"I think it's important lads get a run out, 90 minutes here and there, and it's only good for the squad."

Long hopes his performance up front gives Koeman "a little bit of food for thought" if he needs a different option to Italy striker Graziano Pelle.

The Republic of Ireland international proved a nuisance throughout and took the winning goal wonderfully, striking first time after James Ward-Prowse was tackled.

"It was just more instinct and sometimes they're the easiest finishes when it just drops to you and you've no time to think about it," Long said.

"It was nice to see it hit the back of the net and it took a bit of pressure off us and let us kind of control the game a bit more.

It was a result Ipswich goalkeeper Bartosz Bialkowski found difficult to argue with.

The 27-year-old knows Southampton well, having spent six-and-a-half years at St Mary's, but he believes Town gave his former club a good challenge.

"It was probably a horrible game to watch but I thought we tested ourselves well against a top Premier League side," Bialkowski told the club's official website, www.itfc.co.uk.

"They scored a good goal but other than that, they didn't really trouble us too much.

They have that little bit of quality to win a game.

"It's frustrating to have lost but we have to look ahead to Millwall now and concentrate on trying to earn promotion."