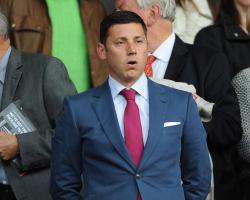 The Southampton chief has again moved to reassure club fans she has no intentions to sell the club or any of the playing squad in the January transfer window.

Liebherr released a statement on Southampton's official website, admitting: "My priority is to establish the proper running of the club at the top."

Press Association Sport understands that means not only recruiting a chief executive to replace departed executive chairman Nicola Cortese, but also formally appointing a full board of directors.

Liebherr will remain in her post of non-executive chairman, while close advisers such as former ice hockey coach Ralph Krueger are in the frame to join the board.

Construction machinery magnate Liebherr is understood to have surrounded herself with a nucleus of advisers over the past year, while her relationship with Cortese, who resigned last week, deteriorated.

"The past week has been a period of transition for the club," said Liebherr.

"I wanted to address you [club supporters] directly to clearly set out my position and expectations for the immediate future.

"After the developments of last week, my priority now is to bring some stability and calm to the workings of the club; perhaps a few smiles too.

"Having inherited Southampton Football Club following my father's untimely passing , I am delighted and proud of the exhilarating period of success that the team and the staff has enjoyed these past few years, buoyed by the unstinting support of the fans.

"I am absolutely committed to ensuring that the club continues this success.

"I have met our manager Mauricio Pochettino and have given him my complete support to build on the good work that has already been achieved.

"We have also said that we have no plans to sell any of the squad during the January transfer window. Yesterday [Monday] I met the rest of the staff and gave them the same message of support."

Markus Liebherr bought Southampton and guided the club out of administration in 2009, but died less than a year later.

Katharina Liebherr recruited Cortese to handle the day-to-day running at Southampton in the wake of her father's death.

Relations between the owner and Cortese soured to breaking point last week, with manager Pochettino forced to confirm he would not follow suit and quit Saints too.

Italian banker Cortese had effectively run Southampton's business affairs on his own until Liebherr decided she wanted great influence.

The 64-year-old lifelong Saints supporter would go some way to calming panicked fans, but Press Association Sport understands Williams remains among a number of hopeful candidates.

In her statement, Liebherr vowed to create a "culture based on open communication, respect and hard work".

"We are now in the top half of one of the most competitive leagues in the world," the statement continued.

"Playing attractive football with a young and ambitious team, and poised to move into world-class training facilities.

"We have much to be thankful for.

"I am particularly excited that the Southampton tradition of nurturing and providing young talent with first-team opportunities is set to flourish with the strong academy foundation we have put in place.

"Finally, let me say this. I will ensure that all decisions made about the future of the club will be in the best interests of its staff, players, management and fans, and will be taken with the prime objective of honouring and maintaining the club's heritage and tradition in the Southampton way."