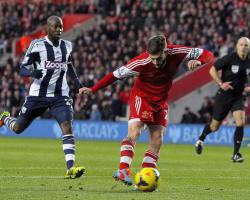 After 26 days of to-ing and fro-ing, the man that led Real Betis to seventh in last season's Primera Division was named Steve Clarke's successor on Thursday.

Mel watched from the stands at St Mary's on Saturday afternoon as assistant head coach Keith Downing took charge of the team for the last time - a match that saw his unbeaten league run as caretaker boss ended by a 1-0 defeat at Southampton.

Mauricio Pochettino's side deserved what was only their second league win in 10 attempts, despite failing to turn their first-half dominance into clear-cut chances.

West Brom's defence, led by the impressive Gareth McAuley, frustrated the hosts and it took Gaston Ramirez's second-half introduction to change the match.

The Uruguay international was sent off as the Baggies won 3-0 at St Mary's in April, but had a more positive impact this time as his superb flick resulted in Lallana prodding past Ben Foster.

West Brom attacked in numbers as they looked to snatch a draw, with only an exquisite reaction save from Artur Boruc preventing Shane Long netting a last-gasp equaliser.

The point-blank stop showed just why the Poland goalkeeper was brought straight back into Pochettino's side after missing six weeks with a fractured hand.

Saints began the brighter at St Mary's, with Lallana forcing Foster into the first save of the afternoon, albeit an easy one, after eight minutes.

The Southampton captain was soon involved again as his chipped cross deflected kindly into the path of fellow England international Rickie Lambert, who, despite being off-balance, came close with left-footed strike across the face of goal.

Steven Davis and Jack Cork had poor efforts from distance as Saints continued in the ascendancy, although without turning their dominance into clear-cut chances.

Any crosses were being well dealt with by the West Brom defence, most notably a whipped Luke Shaw ball that McAuley intercepted as Jay Rodriguez waited to put home.

Steven Reid had West Brom's first opportunity of the afternoon after 27 minutes, with his powerful long-range free-kick flying over.

The Baggies soon had another set-piece after Dejan Lovren was booked for taking down Long, with the Ireland international receiving treatment as the resulting free-kick was punched away by Boruc.

It was a rare period of respite for the visitors as Saints penned them back for the remainder of the first half.

After Foster comfortably dealt with a long-range Lambert strike, the 31-year-old's cross was flicked behind by McAuley as Rodriguez lurked at the backpost before both saw wayward long-range efforts fly over.

The half-time break was a welcome relief to the 28,610 souls inside St Mary's, although Saints came close to breaking the deadlock six minutes after the restart.

The returning Youssouf Mulumbu was caught out by Rodriguez, who burst through the middle at pace and slotted just wide.

Reid blocked a Davis effort moments later as Saints pushed for an opener, with McAuley blocking a Lambert strike as the hosts continued to press.

Ramirez was brought on in a bid to add a creative spark, with his first impact to earn a free-kick from which he tested Foster.

The Uruguay international had a more telling impact in the 66th minute, meeting a pass from Nathaniel Clyne with a delightful first-time flick for Lallana to slot past Foster.

The Saints captain celebrated by showing a T-shirt wishing happy birthday to his mum, who will have no doubt winced when Jonas Olsson earned a booking for clattering her son.

The West Brom defender joined team-mate Long in Howard Webb's notebook, with the Irish striker joined in attack by Saido Berahino for the closing stages.

Zoltan Gera and Matej Vydra followed the England Under-21 international on to the field as Downing looked to maintain his unbeaten league run.

West Brom would have done just that was it not for Boruc, whose point-blank reaction save stopped Long directing home Liam Ridgewell's low cross at the death.