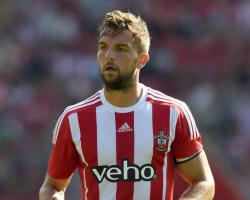 Rodriguez made his first Barclays Premier League appearance since being stretchered off against Manchester City in April 2014 as his side started the season with a 2-2 draw at Newcastle.

The 26-year-old England international missed a scoring chance in the first half but showed plenty of encouraging signs before being replaced by Shane Long in the 65th minute.

And while Koeman hailed Rodriguez's re-emergence he is clearly aware that it will still take time before he returns to the form which had been expected to earn him a World Cup berth last summer.

Koeman said: "I think for him it was a big victory to start because he had trained for six weeks already with us and he made some minutes so he was ready for it.

"But after that long period of being out for maybe 15 or 16 months, I have to say he played very well."

Koeman - who was standing in for brother Ronald who could not travel due to rupturing an Achilles - also admitted his side face a big test if they are to continue to defy the exertions of a Europa League campaign.

Koeman was pleased with the way Saints finished stronger at St James' Park - with Sadio Mane missing two glorious chances to claim victory in injury time - but knows the tougher tests are to come.

With a gruelling Europa League group-stage campaign looming if his side see off Denmark's FC Midtjyllands over a two-legged play-off, Koeman admitted: "It will be hard but first before the group stage we have to play two more games against a good opponent, so then we will see."

Meanwhile Newcastle boss Steve McClaren believes his side showed glimpses of a strong fighting spirit in the way they hit back from conceding an early goal to Graziano Pelle to take the lead shortly after half-time.

It was a particularly encouraging sight for McClaren who admitted pre-season preparations had not gone entirely to plan with the Magpies losing three of their last four warm-up games prior to the big kick-off.

McClaren said: "We learned so much and I think once we get our fitness levels up as the weeks go on this will certainly give us something to build on, not just for the team but the whole squad.

"But what a great response - they kept playing, they kept composed, they kept patient and they kept creating chances and it was a great boost for us to get back in the game just before half-time."