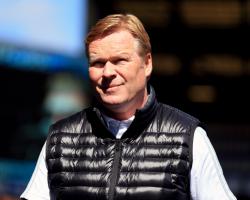 West Ham were awarded a penalty when Wes Morgan tangled with Winston Reid at an 84th-minute corner, though Leicester's appeals were dismissed after a similar 90th-minute incident involving Angelo Ogbonna and Robert Huth.

Koeman believes it needs to be all or nothing and said: "I think if you start to give penalties for that then it stops.

"The way is not to give one time a penalty and in the same game no penalty, because that's no consistency. What you need and what everybody needs (is consistency).

"Everybody knows if you take somebody in his shirt or like a rugby player, you take your man in the box, it's a penalty. If everybody knows then it stops.

"If one day it's a penalty and even in the same game next time it's not, that doesn't help or make it clear for everybody."

Southampton face already-relegated Aston Villa on Saturday but Koeman believes the fact the hosts are already down will make it more difficult for his side to get all three points.

He said: "This Saturday is a difficult one for several reasons - they are already relegated, it will be a difficult atmosphere in the stadium.

"More than ever we need to focus on ourselves and take the motivation from ourselves to play on a good level and win the game.

"It's very difficult because if you don't win nobody is happy, and if you win maybe for most of the people it's normal. It's always the most difficult to play.

"They play home, they need to win the support of the fans back and they will start the game seriously.

"It's all about ourselves and if we are really focussed on the game. That's the work we've had to do to prepare for the game."