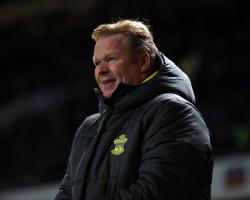 Saints were widely expected to struggle this season having lost Pochettino to Tottenham and a number of their star players to fellow Premier League clubs.

But Koeman brought in a host of new faces, many of whom were not household names in England, and has since led the south coast club into the top four with 15 games remaining.

Pochettino's Tottenham sit two points below Southampton in sixth and the Argentinian reportedly told Catalan radio station RAC1 that he gave Koeman a platform for success.

"You have to say that they invested close to 80million euros (ÃÂ£59.8million) in the summer and it was already a winning team on the up," he was quoted as saying.

But Koeman hit back when questioned about Pochettino's remarks ahead of Saturday's Premier League clash with managerless QPR.

"First of all, it was on Spanish radio so I don't know exactly what was said and if the comments were really like that," said the Dutchman.

"He is free to give his opinions, I'm happy in Southampton and thank you Mauricio; I have an easy job!

"That is the reason that I came to Southampton, to have a little holiday with everything organised, a good team and good players

I'm joking! I have no comments."

Given Koeman's overhaul of the squad, which continued in January with the loan acquisitions of Eljero Elia and Filip Djuricic as well as the permanent signing of Ryan Bertrand, the former Feyenoord boss believes he has put his stamp on a side he did admit owes a lot to those who have spent time rebuilding the club before his arrival.

"It is feeling like my side because we had to make a lot of changes in the team," he added.

"The way the club is doing makes it easier for the manager, Pochettino, (former owner) Markus Liebherr and (head of football development) Les Reed, they have all done a fantastic job in Southampton and, as a manger, you need those people to work well in a good structure - that is the best quality of Southampton Football Club.

Working with the scouting, we brought in good players and the adaptation was easy and the team is working well

The spirit is fantastic but there are different reasons (for that).

Koeman confirmed both Victor Wanyama and Morgan Schneiderlin have recovered from respective injuries and will travel to Loftus Road on Saturday.

With two key midfielders back, Koeman's squad is almost at full-strength and he feels it will have to remain that way if Saints are to continue their push for European qualification.

"We believe in the way we play football and if we can keep everyone fit, that is key, then we can fight for the first six or seven positions in the table," he added.

"We have been struggling a little bit in the last few weeks, not in terms of the results, but we don't have the kind of numbers of players and it can be a bit of a problem when we have a bench which has only under-21 players on it.

It is difficult to keep that but there is a possibility, if we keep everybody fit and available, to fight for European football."