Koeman- Schneiderlin loss is a blow 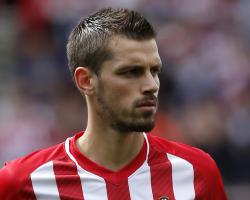 Saints' 25-year-old midfield lynchpin now faces scans on his right adductor, with manager Koeman admitting he does not know the severity of the problem.

"Morgan's not ready for Wednesday because he needs a scan on his adductor, in his right leg," said Koeman.

"Then we have to wait about the result of the scan.

"For sure he isn't available for this Wednesday, but he'll have scans to find out exactly what happened.

"It's too soon to know whether it's serious.

"It's not too soon to say he can't play on Wednesday, but how long he will be out I don't know."

Belgium centre-back Toby Alderweireld stepped up into the holding role in Schneiderlin's absence on Sunday, and could do the same again at the Emirates Stadium on Wednesday.

Koeman said fit-again Jack Cork will also bolster his midfield options, while conceding Saints do not have the squad strength of their top-four Premier League rivals.

Koeman's side now face Arsenal, Manchester United and Chelsea amid a pivotal run of seven matches in 25 days in December.

Former Feyenoord boss Koeman has told his Saints squad they "can't do anything" about Schneiderlin's injury, so must simply stiffen their resolve for a huge test at Arsenal.

"I think Toby Alderweireld did a great job in the midfield position, and the change was because that's our way of playing and I didn't like to change it," said Koeman.

"I didn't have more options to do anything else.

"We know exactly what Morgan means for our team: he's one of our key players and if you miss a key player it's always difficult for the rest of the team.

"We know that and we can't do anything about that.

"More options mean another midfield player: Jack Cork was not available on Sunday, he will be on Wednesday and we have Harry Reed as a young midfield player.

"Still James Ward-Prowse is injured, and that's our possibilities.