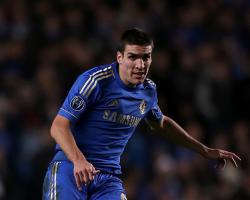 The Spanish midfielder has signed a three-year contract to move to the south coast after a ÃÂ£5million fee was agreed with the Barclays Premier League champions, where he had been out of favour for the past three seasons.

Romeu spent last season on loan at Stuttgart and 2013/14 at Valencia, who Koeman briefly managed - but it was at Barcelona, another of the Southampton manager's former clubs, where Romeu came to his attention

"[Romeu's] 23 years old, played already in the Premier League, had a good season in Stuttgart last year and he makes the team stronger," said Koeman

It's always up to the manager, the confidence of the player.

"I think it's the right moment for the player to make this move to Southampton because he will play more for Southampton than for Chelsea.

"It's a good feeling and he showed already his performance today [in training] and he's hungry to play and to be part of Southampton.

"I know the player already from the academy of Barcelona and I knew about his situation because I know his agent.

"In our philosophy and how we like to play football it's a midfield player who involves perfectly in our team."

Koeman, after missing the past weekend's 2-2 draw at Newcastle while recovering from surgery to his Achilles tendon, will return to oversee Saturday's league fixture at home to Everton.

He remained coy about his reported interest in Celtic central defender Virgil van Dijk, however, but revealed that it is an area he still wishes to strengthen and that he would not consider allowing reported Aston Villa target and captain Jose Fonte to leave.

"We are still working to bring in one defender but a little bit unlucky to have two centre-backs with injuries and Ryan [Bertrand] injured as well.

He is our captain, he's a very strong defender, he's a club man like Kelvin Davis and not one second do I think in my mind to sell that player.

"He's part of the team, he's the captain

[There's] no way to sell the player."