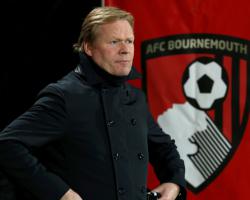 The frustrated Saints boss will show his below-par squad a video lowlights reel of the Premier League loss at Dean Court, in a bid to drive his men back on track.

Saints host Sunderland on Saturday with Koeman warning his men to expect another clash against a side scrapping for everything in a bid to steer clear of relegation.

"It's still not too late for Europe but we have a tough one this Saturday.

"Sunderland are fighting against relegation, so we expect the same kind of opponent again now.

"We have to learn from Tuesday night.

"Normally I try to defend my players but I cannot from Tuesday.

"I told them after the match but they will understand, they are not stupid.

"And we will show them video clips to make sure they are not in any doubt."

Steve Cook and Benik Afobe grabbed the goals as the Cherries pulled off their first home league win over local rivals Saints since 1958.

"Yes I think they will stay up," said Koeman.

"They are much better than some teams in the Premier League.

"They are aggressive, and showing spirit. They play good football, offensive football and can defend well too."