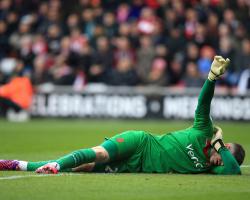 Forster underwent knee surgery after falling awkwardly in the 2-0 victory over Burnley a week ago and estimates for his comeback have ranged from four to 12 months.

Koeman is reluctant to give a more precise time frame for the England international and views Kelvin Davis as a capable deputy, although he admits he may be forced to bolster his goalkeeping options if Forster's recovery is delayed.

"Fraser is down, of course

I spoke to him last week," Koeman said at his press conference ahead of Saturday's Barclays Premier League trip to Everton.

"The operation he had last week went okay, but he will be out for a long time - at least for this season

We have to wait to see how long he will be out for, it's difficult at this moment.

"Fraser is a fantastic goalkeeper

He was and is the number one for us

But as for every player you need good substitutes for each position.

"Kelvin Davis is a very experienced goalkeeper who played very well against Burnley.

"He made some fantastic saves and has a lot of experience, which is important for our last eight games of the season.

"We have to make a decision on the goalkeepers at the end of the season and if Fraser is out for a longer time, a new goalkeeper is an option."

Striker Jay Rodriguez has been missing for a year to rehabilitate his own knee complaint and Koeman has revealed that he could be back before the end of the season.

"Jay has been training with the group and should be ready to play in four or five weeks," Koeman said.

Midfielder Steven Davis is a doubt to face Everton because of a groin injury he sustained on international duty for Northern Ireland.