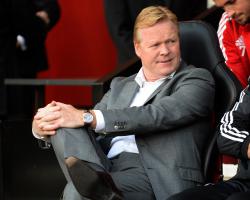 The first leg of this third qualifying round tie could not have gone much better for Saints last week, ending a topsy-turvy 12-year absence from continental competition in style.

A potentially tricky encounter with Vitesse was dealt with impressively as goals from Graziano Pelle, Dusan Tadic and Shane Long secured a comprehensive 3-0 win at sold-out St Mary's.

Such dominance means one bookmaker has priced Saints at 1/250 to progress past Vitesse on Thursday, not that manager Koeman will be letting his foot off the pedal.

"I hope for a good game and, for sure, it is a game that we will start with the same intensity that we did last week," he said.

"Even with this result

It is a comfortable result but it is only after 90 minutes.

"Football is sometimes strange and if you don't start with enough concentration, if you don't play with the same intensity in pressing the opponent, then it is possible that you get a difficult evening.

"But if we play at our level with the same concentration and the same intensity, the qualities make the difference."

Koeman will be forced into at least one change after Jordy Clasie sustained a hamstring injury in the first leg, but other than that he has promised to play a strong team.

It seems unusual for a manager to name such a side given the circumstances, but - as he showed during his first season at St Mary's - the Dutchman considers cup competitions as important as the league.

"I try, I try always," Koeman said, ahead of facing the club with whom he began his managerial career.

"Of course, when you have players who are not really 100 per cent, maybe that is a good reason to change something.

"But if everybody is available then I don't make a lot of changes.

"We have to respect the competition because we did a great season last year and we played for the Europa League over 38 games in the Premier League.

"It is a crazy thing to think about it, to throw everything away in the start of the Europa League legs

I hate to lose and that mentality needs my players as well."

Those words will no doubt be welcomed by Southampton's 1,500 travelling fans, who could witness Jay Rodriguez's return to competitive action after a 16-month absence.

Long, who wrapped up last week's 3-0 win after coming off the bench, is absent through illness, although Steven Caulker is in line for his debut after arriving from QPR last week.

Toby Alderweireld's departure and a serious injury to Florin Gardos necessitated that loan addition, with Koeman still planning to add another centre-back to his ranks in the coming weeks.

The Saints manager said "we need one more in that position", but was coy when asked about the speculation surrounding Celtic's Virgil van Dijk.

"It's a lot in the media today about the player," Koeman said.

"I think it's the best in my position to say nothing about that, because everybody knows he's a good player, it's a lot of interest for the player.