Koeman keen to get back on track 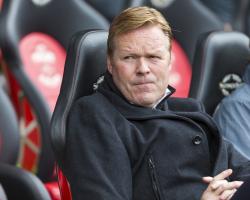 Many predicted a relegation fight after the summer talent drain, yet Saints are pushing for a place in Europe with three matches remaining.

Koeman's side have already set a new record points tally in the Premier League era and are on course for a best-ever finish, yet the way the season is petering out has dampened the mood somewhat.

Saints have won just once in five matches and head to Leicester this weekend on the back of a 2-1 loss at Sunderland - a performance Koeman called their worst of the season.

"I'm not so happy about the last few weeks and we are always talking about the whole season," the Southampton manager said.

"We need a good reaction after the poor game we showed last week.

"It's a difficult opponent Leicester, full of confidence, and we have to come back to our level because it was a poor game."

Leicester, by contrast, are third in the form table after former Southampton manager Nigel Pearson led his side to five wins in six matches - a run which looks likely to keep the Foxes in the top flight.

"It's a different team to when we met Leicester at home," Koeman said, referring to November's 2-0 win.

"They had a great run the last few weeks

They won five out of six and lost against Chelsea at home, but even that match they play well.

"They have good spirit, they are aggressive and full of confidence in the system they play and they use

It's a difficult one and that's what I mention to the players.

James Ward-Prowse's sending off at the Stadium of Light means he misses the trip to the King Power Stadium, where Fraser Forster, Jay Rodriguez and Morgan Schneiderlin will be absent through injury.

Dusan Tadic is also set to miss out again with a troublesome groin complaint which may have brought the Serbian's season to a premature end.

"I spoke to Dusan and he was struggling a long time with a groin problem.

"We said 'okay, we have to stop now, we can't continue like this because maybe you have in pre-season the same problem for next season'.

"It's going better but going slowly and maybe yes (it is the end of his season), maybe not